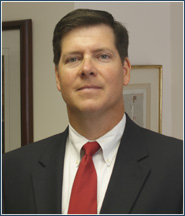 J. Robert (Rob) Williamson has practiced law for over 32 years and has been the managing member of Scroggins & Williamson since its formation in 1993. Prior to that time, he practiced with the law firms of King & Spalding in Atlanta and Stichter, Riedel, Blain & Prosser in Tampa, Florida. Mr. Williamson received a B.S. from Vanderbilt University in 1983, majoring in Business Administration, and he received a J.D. from West Virginia University in 1986, where he was a member of the Order of the Coif and served as Senior Articles Editor of the West Virginia Law Review. He is admitted to the bar in Georgia, Florida, and West Virginia. Mr. Williamson specializes in business workouts and reorganizations, both in and out of bankruptcy court, and litigation of issues concerning creditor and debtor rights. He has advised and represented a wide variety of parties, including debtor companies, asset purchasers, trustees, secured creditors, official committees, and litigants in preference and fraudulent transfer actions.

Mr. Williamson is a past Chairman of the Southeastern Bankruptcy Law Institute and currently serves on its Board of Directors. He has served as the Chairman of the Bankruptcy Section of the State Bar of Georgia, and has also served on the board of the Atlanta Bar Association’s Bankruptcy Section. He is currently a Master and serves as Secretary and Counselor-Elect for the W. Homer Drake, Jr., Bankruptcy Inn of Court.  He is a member of the Advisory Board for Emory’s Bankruptcy Developments Journal. Mr. Williamson is AV® Preeminent™ Peer Review RatedSM by Martindale-Hubbell® and is among the select group of lawyers included in Martindale-Hubbell’s Bar Register of Preeminent Lawyers™. He is listed as a leading Georgia bankruptcy practitioner in Chambers USA: America’s Leading Lawyers for Business and is listed in The Best Lawyers in America for Bankruptcy. He has been recognized as a Georgia Superlawyer in Bankruptcy & Workouts by Atlanta Magazine since 2005. Mr. Williamson was also selected by his peers for inclusion in Georgia Trend Magazine Legal Elite issue.

When you need experienced bankruptcy counsel, call Scroggins & Williamson, P.C. at 1-404-893-3880 or contact the firm online.  Located in Atlanta, Georgia, the practice regularly assists clients throughout Georgia and the Southeast U.S.